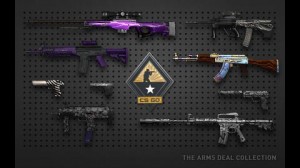 One of the beast features of Counter Strike is its wide variety of weapons to choose from. Whether you want to obliterate the enemies with the powerful but inaccurate machine gun or stab them in the back with a knife, there is something for everyone.

There is only one melee weapon in Counter Strike – the knife. A machete was planned for one of the betas but never released as the developers thought it wasn’t in the spirit of the game. You could often see professional players use the knife for close combat. The knife has two attacks – primary and secondary. The primary attack is quick but makes less damage. The secondary attack is twice as slow but does four times as much damage and if used from the back it would instantly kill an enemy no matter whether they have armor or are at full health. Sometimes players decide to only use knives as to make the game more challenging and fun.

Pistols are a secondary weapon in Counter Strike and everyone has one. They are weaker than other weapons and have low clip capacity. The only exception is the Desert Eagle, which is considered one of the most powerful weapons in Counter Strike. Apart from it, there are also the Clock 18, USP, P228, Five-Seven and the Dual Berettas. Pistols are only semi-automatic but if aimed carefully can deliver some much-needed headshot.

There are only two types of shotguns in Counter Strike – the Leone 12 Gauge Super and the Leone YG1265 Auto Shotgun. These weapons are cheap and usually are used for close combat as they deal heavy damage up close. We rarely see professional players use the shotgun as they usually prefer the long range snipers or the highly effective rifles. The important thing for shotguns is to reload sooner as opposed to later as each round is reloaded individually. The upside is that you can fire to interrupt the reload.

Submachine guns are once again a cheap alternative when you are low on cash. They have a fast rate of fire and pack more firepower than pistols. Some pros prefer SMGs to the larger rifles as they have a weight advantage and if aimed properly can kill just as effectively as the more expensive weapons. The submachine guns available in the game are TMP, MP5 Navy, UMP and P90.